Who Are You Calling Socially Stupid?!

He makes a lot of valid points, although I strongly disagree that their “middle class shoppers will feel a little less enthusiastic about entering the store now, and store traffic will decline”.

This was a storm in a teacup, which poked fun at what Waitrose is already known for – the middle class shopping experience (‘…because it’s the only place I can get Tarquin’s kumquats’).  The responses were generally funny and inoffensive – there certainly didn’t seem to be any foul-mouthed trolling going on.

Ritson states that “the ultimate purpose of Waitrose’s social media strategy is not to start conversations… (it’s) to build its brand and increase sales… by getting existing shoppers to shop more frequently and attracting new shoppers.”

Assuming he is familiar with the detail of their strategy, his view that social engagement is incapable of building brands and increasing sales (by encouraging customers into store) feels a bit out of touch.

Where he’s right on the money, however, is in calling out the (Empereror’s New Media) eejits who said it was ’an enormous branding success’

The key point is that Waitrose were simply guilty of the same crime as most marketing departments – giving insufficient thought as to how Social Media should fit into their overall strategy and being unprepared for all possible responses.

Their campaign idea was poorly thought out not because they were trying to engage with people, but because their approach was more suited to a 1970’s back-of-pack competition; ‘I like Waitrose because…’ in 12 words – or 140 characters – or less.  As a commentator on Ritson’s piece rightly pointed out, a better conversation starter would’ve been ‘what don’t you like?’, to show their aim is to learn and improve.  The execution just seemed smug and/or desperate – please tell us how fab we are!

As Sebastian Joseph argued in his piece, their real crime was how slowly and half-heartedly they followed up on the responses.  It would’ve been far smarter to join in on the joke and show a (human) sense of humour.

Ritson called this “an inane attempt to find something – anything – to drive Twitter conversations about the brand”, but you could argue that it doesn’t actually matter what question you ask if your intention is simply to start a debate.  In Benetton and Ryanair’s world, there’s no such thing as bad publicity.  If you put your head above the parapet, you can guarantee someone will throw rocks at it.  The true test of a strong brand team is whether they’re prepared to respond with speed, wit (if appropriate) and charm.

Looking at their timeline over the last few days, there’s been no subsequent mention of the ‘conversation’, so #Reasons either wasn’t intended to start one (if so, what was it doing on Twitter?) or they got scared and ran away.

It’s true that Social Media is a big scary new world for most marketers (wait, you mean customers can talk back at me without writing to head office in purple ink?!).  The smart ones test the water, of course, but they keep their toe in there until they get used to the temperature.  Then they can jump on in (head first).

Many moons ago, Marketing Week ran a Tom Fishburne cartoon (below) which still sits on my pinboard. 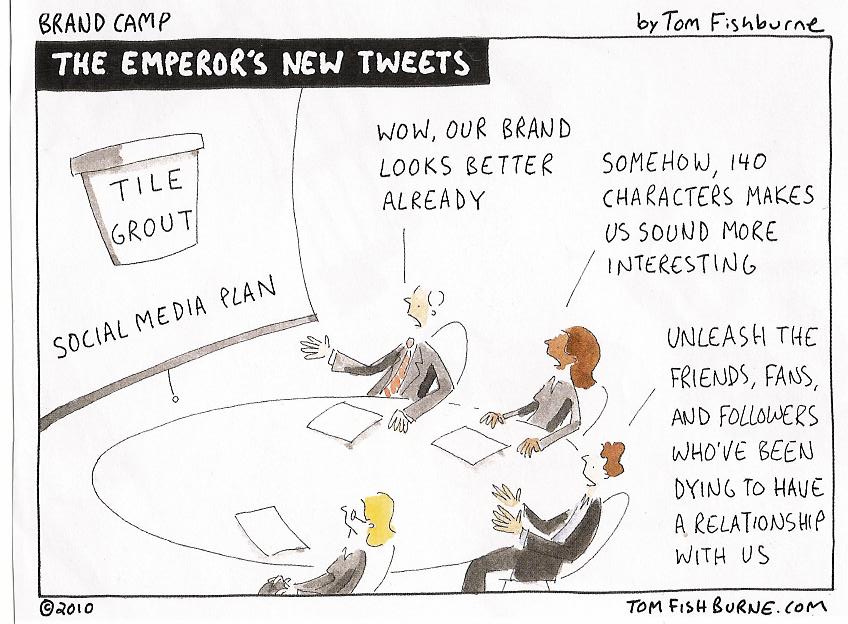 The reality for most brands (as well as The Tile Grout Company) is that their customers haven’t been waiting desperately to have a relationship with them, although they do like the immediacy of a new Customer Service channel (so much easier than phoning up a call centre!).

So if you’re going to start a conversation, or build a relationship, remember it’s an ongoing, long-term thing, just like in the real world.

Not a game of knock down ginger.