White Wine For The Lady… 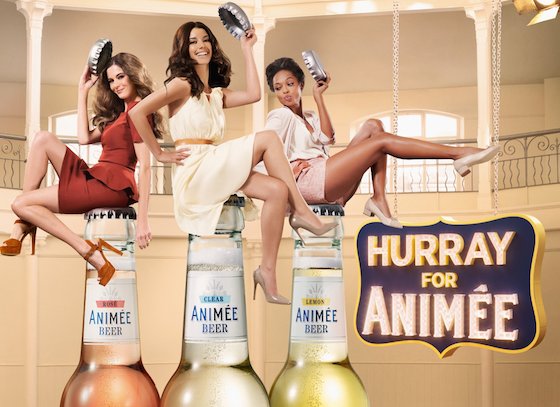 In the wise words of Al Murray’s pub landlord, “white wine for the lady, beer for the gentleman… them’s the rules.  And where would we be if we didn’t have rules?” (Answer: France!).

Here in the UK, Molson Coors have pulled their Animée ‘lady beer’ after just one year.  Good.

In last week’s Marketing, WCRS Planning Director Matt Willifer argued that Animée was a “brave launch by an admirably innovative company” (?) but suggested that the problem was its positioning (‘for women’) immediately implied ‘not for men’.

Indeed.  But I’d argue that it wasn’t for women either.  I can just imagine the focus group. You don’t like beer? No problem, we’ll water it down, turn it a weird shade of green and put it in a girly bottle for you!

Apparently, 77% of women don’t drink beer.  That means 23% do.  Just yesterday, a female friend and I enjoyed a couple of cold bottles of Sol with our tapas lunch. After four years in Manchester, I’m particularly partial to a pint of Boddies, and I love Fuller’s Honey Dew.

So here’s the thing…  if you like beer, you like beer.  Male or female, you won’t really be interested in some diluted shandy in a pretty bottle.

In the U.S, they have a great selection of light beers, including a rather nice Bud Light with Lime. It’s packaging is completely gender-neutral – both my partner and I were more than happy to drink it.

The same article states that 33% of women will drink beer at a gig, but only 2% would do so when out with the in-laws.  Clearly, then, the problem for those women is not the taste, it’s the social acceptability on certain occasions.  Sometimes, other drinks are just more appropriate.

But Animée and Cadbury’s new Crispello bar (with its condescending ‘a little treat for you’ strapline) are examples of a far more worrying attitude amongst some marketers.

‘Girly’ versions of products actually imply that women are too stupid to make their own choices unless things have been watered down and prettified.  It’s true that women often look for lighter, lower calorie versions of normal products.  But you know what – that’s all the information we need!  You don’t need to break the product into little chunks for us, or pop it in a pink, re-sealable packet.

Funny how we can make informed choices about everything else we buy, but when it comes to ‘treats’ like chocolate and beer we apparently require a special (needs) version….

Belinda Parmar, CEO of “Lady Geek’, calls this ‘pinking and shrinking’.  The work she has done making hi-tech brands more accessible to women shows just how misguided this approach is.

Back in the beer sector, an ad for a new beer called Equator shows a green and silver bottle on a plain chrome background.  It’s alcohol- and calorie-free, but it’s positioned as a “premium beer with no compromise”.  The ad appears in Slimming World magazine, so I’d say it was quite squarely aimed at women.  It may well taste like cat pee (I haven’t tried it), but it looks like a bottle of Becks.

Matt Willifer suggests that the risk of niche branding is that if you alienate other potential customers, you’re more likely to fail.  He’s completely right.  Unless your brand is specifically designed for one sex or the other*, gender neutrality is the only sensible option.

Patronising your core target audience most definitely is not.

*My absolute favourite example is ‘L’Oreal for Men Expert Energetic X-treme Turbo Booster’.  Or moisturiser, as we ladies call it.