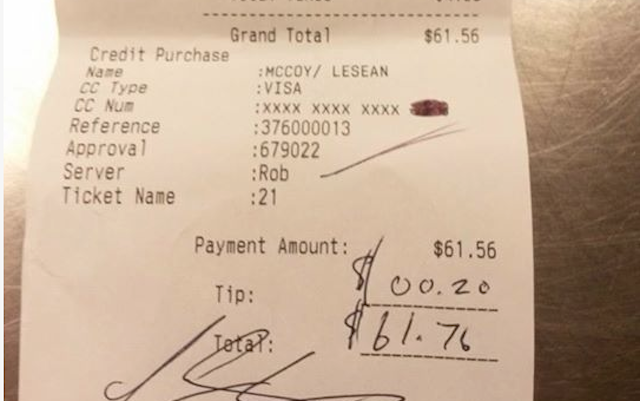 Back in December 2014, I wrote a blog about the archaic and confusing practice of tipping serving staff in restaurants.  I suggested it was time to end the frequent ‘bill shock’ and the lottery of who actually gets the money.  A few months later, the media was full of stories about the big restaurant chains withholding or deducting tips (for ‘admin fees’ or to ‘share’ with the wider team) and in some cases, actually taking a percentage of the server’s wages, whether they’d made that amount in tips or not.

It triggered a Government review, which has just published its preliminary findings.  There is widespread support for the view that discretionary service charges should be scrapped or limited, and that they should be both clear and voluntary.  At time of writing, 88% of respondents to a Daily Telegraph poll agreed they should be abolished completely.

This doesn’t mean we’re too mean to tip.  We just want to be sure the right people are getting the money and/or being paid a decent wage in the first place.  Even the restaurant critics agree.

“Because the British people know, at some level, we’re being fleeced each time we’re shamed into adding extra cash on a dining bill for ‘service’. We know it rarely reaches the server who went that extra yard, either fully or at all.” Grace Dent, Independent

Jay Rayner, writing in the Guardian recently called the system “bizarre… something that only applies in restaurants” and has also been calling for it to be completely scrapped;

“It’s time to acknowledge that the notion of tipping is a crass, outmoded, dysfunctional and ultimately inefficient system, ill-suited to a service-industry age… it’s now so tainted as to have outlived its usefulness. The restaurant business needs to scrap the concept of tips and service charges altogether.  (Servers) have the right to the dignity of a wage that’s both reliable and reasonable.”

I’m just back from Florida where the U.S tipping culture is crazier than ever, with hotels and restaurants ‘suggesting’ an optional service charge of between 18 and 22%. For a Brit, it’s especially galling to be expected to pay such a steep levy to people who are just doing their jobs (especially at a hotel, where you expect your room and resort fees to cover staff and amenities).  And why should only the server get an additional reward?  What about the kitchen staff?

It made me wonder how tipping impacted on the minimum wage.  In Florida, someone in a ‘tipped’ job can legally be paid $3 an hour less than someone in a ‘regular’ job. (Not sure who decides whether a job is tipped or not.  Maybe there’s a rule book somewhere).  If you do the math, as our American friends say, it shows just how unfair this system can be.

Imagine a hotel pool with a small Bar & Grill.  There are 20 couples around the pool on an average day, each with an average tab of $50.  With a service charge of up to 22%, the pool waiter could be earning up to $220/day in tips when, on an eight-hour shift, he only needed an extra $24 to reach minimum wage.  But he’s making almost 10 times the amount.  Even if that’s split with a colleague, it’s still $500/week.  Good for him, you may say.  But the cashier at Walgreens has no hope of adding over $500/week to her wages – so how is that fair?  And this example has a low base – imagine the earning potential of the waiter in a high end restaurant. No wonder these guys chase you down the path if you ‘forget’ the tip…

In the UK, the minimum wage applies equally to all jobs, so the addition of tips in some industries and not others makes this system even more inexplicable and indefensible.

It’s time to get rid of restaurant service charges altogether and build fair staff wages into the overhead, like every other business has to.  The real Living Wage is a much fairer playing field, although we’ve already seen evidence of some employers stripping away staff perks to ‘make up for the additional costs’ of the recent minimum wage increase.

Ah yes, corporate greed.  I shall come back to that shortly.  Until then…