Sex only sells sex. Let’s hope the tide is turning in Cannes

Many years ago, I was driving through Rome, admiring the scenery, when I was suddenly confronted by the enormous billboard image of a naked, reclining woman. Perched proudly on her tanned bottom was… Let’s guess, shall we?  Some sunscreen?  Perfume, maybe?  An anti-cellulite gadget?   No.  A packet of pasta.

I was a bit taken aback by the level of nudity on a 48 sheet, but more astonished that her bum was deemed to be an appropriate place to put your groceries.

Since then, my feminist antennae have been highly tuned to the issues of sexism and the objectification of women in advertising.  And in the last few years, they’ve been twitching terribly.

The question, “why do agencies still fall back on sex and sexism to sell stuff?” was recently asked on Twitter by NoMorePage3 (who now lobby on this issue), next to a picture of a tube card poster which bore the headline, “we can’t swap your missus for a Swedish supermodel…”.  In response, an agency colleague of mine defended the industry, blaming an ‘in-house designer’.

He was probably right. The bigger agencies have always been better than this.  I don’t believe that any agency I’ve ever worked with (and that is a great many) would ever find themselves so stuck for a creative idea that they’d sit round a table and go, “You know what?  Let’s just stick the product on a naked woman and go down the pub”.

So who’s to blame?

The fact that this stuff exists, in our public spaces, means someone, somewhere, is responsible.  Media owners, clients and their agencies (whether internal or external) are still producing and approving it.

How about the recent poster on the scaffolding outside Marco Pierre White’s new restaurant in Birmingham?  There, next to an image of a woman’s bottom (again?!) was a headline about them working on a ‘new rear entrance’.

“As the father of two teenage girls, I am extremely concerned about this kind of advertising which can demean people, particularly women, and make them ashamed of their bodies. It is high time it came to an end.”

Bray Leino planner Edd Southerden recently said that rather than whinge about this decision (they were?!), agencies should “do some proper thinking about how to present our brands… call it brand social responsibility.” He’s absolutely right.

The ASA has also pledged to take the issue of gender stereotyping seriously, and are currently compiling a review.  NoMorePage3 are helping their research by asking people to submit examples under the #whysosexist hashtag.

But we have a much bigger problem than body image, stereotyping and whinging agencies.

As whilst reputable UK agencies are largely better than this, we are, as an audience, still subjected to sexist, objectifying rubbish produced abroad and deemed ‘appropriate’ for a European or global audience.

From the everyday subliminal messaging of FMCG ads – where women still ‘belong’ in the kitchen and men only do the cleaning or washing to be the butt of weak ‘aren’t men useless!’ gags – to car ads where the woman is the passenger, or only interested in its shopping capacity, through to the overt sexualisation of the most mundane, everyday products.

The “Women Not Objects” campaign was created by ‘female powered’ US agency Badger & Winters.  Founder Madonna Badger understood that the objectification of women in advertising was contributing to how undervalued they were by society and themselves, and that agencies needed to show greater empathy with female consumers. And as women make 80% of purchase decisions, but 91% of them were “not connecting” to advertising, this made a great deal of financial, as well as social, sense.

Badger & Winters made this powerful two minute film to illustrate this problem. If you haven’t seen it, please watch it before you read on.  And if you have seen it, watch it again anyway.  It gets me every time.

Hey but sex sells, right?!  No, it doesn’t.  A recent study backs this up – sex and violence have either a negative impact on advertisements or no impact at all.

In the meantime, as the film shows, the culture of objectification is already pervasive and mainstream.

In Holland, a recent campaign for Dutch railways featured a book extract on the back of a bus.  Great idea.  Except the chosen passage read, “the rope around her wrists dug deeper every time she tried to free herself…the filthy rag in her mouth would stifle any cry…”.  Is that really suitable reading for anyone in the street?  What message does it send to misogynists or potential rapists, do you think?  What’s that you say?  Lighten up?  It’s just a story!

Another growing, and worrying, global trend is the depiction of real women as headless objects.  Even KitKat did it on a recent on-pack promotion (replacing the model’s head with a shopping bag).  This is a whole article in itself, but if you have any doubt about how common, or how damaging, it is, check out ‘The Headless Women of Hollywood’.

The ad industry must turn this tide

I truly hope that at this year’s annual festival of creativity, the Cannes Lions, the tide is finally starting to turn.

Gender Equality is high on the agenda and the event is hosting many strong female speakers; business women, journalists and creative directors.  Their voices have been absent for too long.  And we need more men to start spreading the same message.

On Monday, Madonna Badger made an important speech entitled Sex, Lies & Advertising.  Her point is that sex doesn’t sell products.  It sells sex.  It harms brands.  It harms kids.  And it definitely harms women – their safety, their credibility, their reputation, their self-image, their futures.

Her new campaign film is called What Our Kids See.  It’s another hugely important and impactful two minutes. Please watch it.  As one little boy puts it, “I don’t think it’s ok to show a woman like that.”  You’re right, sweetie.  It’s not.

The ultimate and serious consequence of de-humanizing and objectifying women is domestic violence, rape and murder.  Sorry did I make you spill your latte?  Did you think this was just a rant against sexy advertising?

An organisation called Counting Dead Women notes that so far this year, in the UK alone, 57 women have been murdered by men.  That’s one EVERY THREE DAYS.  If that was happening to Jews or Asians, there would rightly be a national outcry.

It’s time those responsible for creating this culture understood the full ramifications of exploiting women in this way.  As the Make the Link campaign explains, it creates a dangerous foundation. 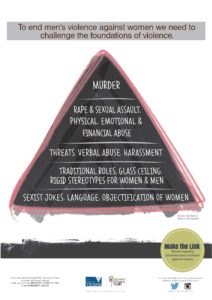 In Malta, the National Commission for the Promotion of Equality is concerned about the escalating number of complaints and says this type of advertising must stop;

“The pervasive sexualisation of women and girls in media representations reinforces the stereotype that a woman’s value is determined by her physical appearance and that woman’s primary role is that of pleasing men. This correlates with unequal relations in society and has a direct adverse impact on women’s equal participation in all spheres of life as well as sexual harassment.”

I sincerely hope all these initiatives and campaigns will start to make a real difference.  Social Media is an excellent medium for calling the brands, the media and the regulators to account.  But as Collective Shout rightly say, the whole system is dependent on people complaining, not preventative measures or pre-vetting.

In the UK, only offline broadcast ads require pre-clearance and the ASA still judge any ads that have been complained about against four criteria; Legal, Decent, Honest and Truthful.  But the ASA is now 55 years old, and ‘decent’ is a very 1950’s word.  Maybe it’s too subjective a term for today’s culture?

So even if, as a client or agency person, you’re completely blameless, and responsible for only the highest standards of female representation and empowerment in your work, perhaps your partner offices in other territories aren’t quite so good?  Please, don’t ignore it.  Challenge it and call it out.  YOU can make a difference.

We, in the marketing community, are responsible for this.  So we need to change it.  We can no longer collectively shrug our shoulders and go, oh well, it wasn’t my client, my agency, my office, my market.

And if you’re ever presented with work that makes you wonder if it might be offensive or damaging, just apply the simple racism test.  Swap the word ‘woman’ for ’black person’ or ‘Muslim’ and see how it reads.  Would it be racist?  Would it be legal?  Then why are our gender equality laws so easily ignored?

In Cannes this week, lots of speakers are hoping to convince the industry that a responsible portrayal of women in advertising is not only necessary, but good for business.  Yesterday, Unilever finally vowed to end the stereotypical portrayals of women in their advertising, acknowledging both the economic and moral reasons for doing so.

Let’s hope by the time the next Cannes Lions rolls around, we’re already starting to view this type of advertising as outdated and offensive as those old ‘smoking is good for you’ messages.  Until then, let’s name and shame the people who think this is ok.  Not just the brands or the agencies, but the individuals.  Let’s ask them if that image would be ok if it was their wife, their mother, their 12 year old daughter.

Clients, creative directors and media owners must be held to account.  Or this will never change.