100 Years On, How Much Has Really Changed? 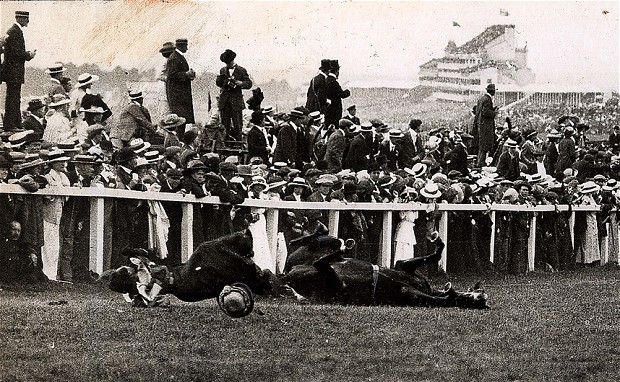 Author’s Note: I make no apology for the length of this blog post.  Sadly, there’s a hell of a lot to say.

The 4th June 2013 marked the 100th anniversary of Emily Wilding Davison’s death under the hooves of the King’s horse, but sometimes I seriously wonder how much we’ve really achieved since 1913.

My (girl’s) school colours were those of the suffragettes, purple, white and green, worn proudly in a self-made posy on Founder’s Day.  At the age of around 14, when my feminist (I always preferred ‘egalitarian’) leanings kicked in, and I started buying Spare Rib magazine instead of Jackie with the money from my Saturday job, I couldn’t possibly have imagined there would be a need to re-launch it over 30 years later.

But here we are in 2013, and that’s exactly what’s happening.  Women’s movements, in many forms, are springing up all over the place.  They shouldn’t still be needed.

Media misogyny is worse than ever.  The day after the Duchess of Cambridge gave birth to an 8.5lb baby, OK Magazine put her ‘post baby diet plan’ on the cover.  (Message: It’s been 24 hours! Why are you still so fat?!).  The Daily Mail Online ‘sidebar of shame’ is relentless in its criticism of women’s appearance; women are either ‘flaunting their curves’ or ‘worryingly thin’, or pregnant.  But, strangely enough, almost always wearing a bikini.

The role models young girls seem to aspire to include Katie Price, The Kardashians, and the cast of TOWIE. (Girls, please.  Stupidity is not worth emulating and plastic surgery should not be a career choice).  Every day there is yet another article about what women should or shouldn’t do (at work, when pregnant, when going out…).

Even at the peak of their careers, women have to put up with casual, blatant sexism.  Marion Bartoli wins Wimbledon, and John Inverdale says her OWN FATHER must have suggested she work hard at her tennis as ‘she was never going to be a looker’.  Madonna speaks at a concert for women’s rights – sensibly dressed in a sweater and trousers – and the next day all the tabloids could focus on was her latest facelift.

The world of marketing is not much better.  Many ad agencies continue to behave like it’s 1950.  TV ads for household goods still only ever feature women, even for a modern brand like Ecover, whose guiding principals are ‘Respect, Integrity and Commitment’…  (For the planet maybe, but for women, nah, not so much).  The subtext is clearly spelt out – ‘your place is in the kitchen, this is women’s work’.  Whilst (presumably male) clients continue to sign off ads that are so sexist and offensive (I’m looking at you, Renault) that they get banned.  (Note to agencies; How about you stop wasting everyone’s time and money by NOT PRODUCING THIS CRAP IN THE FIRST PLACE?).

There is a real worry that this will only get worse.  As the axis of the ad industry shifts to digital, the number of women joining it is in decline (geeks only need apply).  Currently, less than 17% of UK tech jobs are filled by women.  How many women will be in senior, influential positions in advertising in 10 or 20 years time?

Meanwhile, the music industry, and in particular R&B music, has been treating women like disposable accessories for quite some time.  But it took the aptly named Robin Thicke to scrape a new low.  His Blurred Lines video, featuring naked models prancing about while he and his two accomplices remain fully clothed, was rightly banned from mainstream TV.  (But still easily available online).

And if you are in any doubt about just how offensive this infuriatingly catchy song is (I loved it until I realised what they were singing about), check out these lyrics;

Nothing like your last guy, he too square for you

The (female) director and models defended their involvement by saying they were ‘empowered’.  Oh, spare me.  I barely have the energy to respond to this tired old cliché.

Apparently, they enjoyed ‘wielding the power’ over the guys.  Hello?!  Do you really think that dancing around in a G-String (for money) makes YOU the one in control?  When I see Robin Thicke prancing about in his pants, I’ll know who’s empowered.  And, by the way, in a nice film studio with some well-behaved (and very wealthy) young men, I’m sure you were perfectly safe.

Meanwhile, have you noticed what’s happening in the real world?  Heard the news from India recently?  Or how rape is increasingly being used as an act of violence and suppression (against both women and men) in the countries involved in the Arab Spring?

The murder and abduction of young girls and women is an all too frequent news headline in this country (and many others). While you’re thinking about that, consider how often TV police dramas focus, in grisly, autopsy-slab detail, on the murder of a naked young man?  Can’t think of any?  No, nor me.

In the workplace, women’s pay still lags behind that of men despite the Equal Pay Act coming into force over 40 years ago.  Women are always hardest hit by a recession, as part time, public sector jobs are the first to go (along with benefits and childcare).

In the world of politics, only around one fifth of MPs are female.  Perhaps it’s no wonder when new female MPs are routinely assembled for a tabloid photocall under the headline ‘Blair’s Babes’ or ‘Cameron’s Cuties’, and the draconian working hours of the Houses of Parliament expect MPs to remain at work until midnight, or later.

But it’s abundantly clear what women bring to world stage; they make better diplomats, as they tend to care more about mutual solutions than point-scoring victories (Condoleezza Rice, Hillary Clinton).  They’re more fair-minded, and less willing to put up with the ‘old boy network’ status quo (Margaret Hodge).  And they’re currently doing the best job of managing the European economy (Angela Merkel and Christine Lagarde). Or should that be ‘getting us out of the mess the arrogant male bankers landed us all in…’

The fight for female equality is far from won, and the key point is it’s not a single-issue fight anymore (winning the vote or equal pay).  It’s about battling against an insidious culture of repression that seeks to marginalize, demean or silence over 50% of the population.  A culture that has seeped into the mainstream.  It’s offensive, and it’s everywhere.

It’s death by a thousand cuts and that’s why it matters.

If black people were presented and treated in this way on the basis of their skin colour, there would be justifiable outcries of racism, and things would change pretty damn fast.

But there is hope.  The internet, whilst being the source of much of this new discrimination, is also proving to be a powerful weapon.  Through Social Media in particular, women have the opportunity to shout (and fight) back.

Online projects like The Women’s Room, No More Page 3, Everyday Sexism and Keep Women on Bank Notes have raised important issues of female representation in the wider public domain.

And young women worldwide are finding their voice, too.  From the incredible Malala Yousafzai at one end of the spectrum through to 12 year old Kayla Beaconsfield at the other, who loves cycling and simply can’t understand why the Tour de France should be a men-only event.

This weekend there was another low point.  Just a few days after the Bank of England relented and agreed to keep (at least one) woman on UK banknotes, the architect of that victory, Caroline Criado-Perez, was subjected to the most horrendous Twitter campaign of threats of (mostly sexual, all illegal) violence, clearly designed to ‘put her back in her box’.

Despite hundreds of us supporting Caroline by asking Twitter to take down these abusers, their initial response was ‘report it to the police’.  In the same week the Prime Minister asked the ISPs to take responsibility for offensive and illegal content, Twitter simply shrugged their shoulders.

But they had clearly underestimated the power of their own site.  Within 24 hours, a Change.org petition had been set up to lobby Twitter to add a simple ‘Report Abuse’ button.  In just a few hours it had gathered over 10,000 signatures and was on BBC News.  The next day, the issue was debated in every newspaper and news channel and had attracted the support of key MPs.  Twitter then announced it was ‘reconsidering’.  By the evening, there were over 20,000 signatures and an arrest of one of the issuers of the threats.  (At the time of writing, 48 hours after it was set up, it’s topped 61,400 signatures).

Laura Bates of the Everyday Sexism project observes that men catcalling and making lewd comments to women in the street is all about ‘putting women in their place’ and showing them ‘who’s in charge’, from a very young age. And, I’d add, because they can get away with it and because they think it’s funny.

Feminism today is about standing up to all these bullies, whether they’re individuals, corporations or governments.  It’s about challenging these ‘everyday behaviours’ that create an unacceptable and unequal society.

Fortunately, there’s a new breed of strong and fearless women who will not put up with this anymore.  As Caroline herself tweeted, it’s time to start #ShoutingBack.

Laura Bates, Lucy Anne Holmes (No More Page 3) Caroline Criado-Perez, Malala Yousafzai, Kayla Beaconsfield and many others.  You are the new suffragettes, and I salute you.